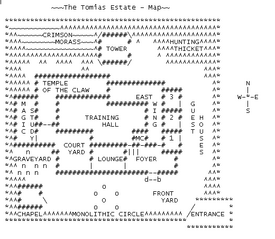 Map of The Tomias Estate's Many Areas

The Tomias Estate (also known as TTE for short sometimes) is a public area on TapestriesMUCK that caters to Dark Ritual and Dark Magic Themed Characters and Roleplays, and subcaters to Supernatural Begins, such as Vampires, Demons, Undead, Dark beasts, aswell as those who are seeking a 'High Protocol' area in regards to d/s and Master/Slave style play. 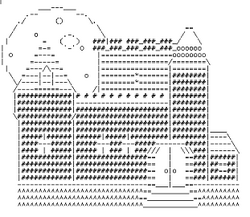 Noting a Lack of Places to Roleplay being a Vampire that actually had locales appropiate to this fact, The orignal (and Current as of September, 2008) Owner, RichardTomias, submitted an Application for 'The Tomias Estate'. It's Orignal Application can be Found Here: [1].

Entrance - Entrance To the Estate. Rules Reading a Requirement.

Front Yard - The Front Yard to the Estate. A Small Hub Area.

Guest Houses - The Private Rooms. Can be Locked from the Inside to Prevent Intrustion.

The Tower - The Area's 'Heavy/NC' Area, and Contains a Mad Scientist's Laboratory, A Catacombs, a Tourture Dungeon, a Sacrafical Pit, and a Heavy Tentacle Play area called 'Ner'rathk's lair'

The Chapel and Graveyard - A Descrated Chapel for Dark Rituals, and a Graveyard with a Mausoleum for those who perfer a much..quieter setting.

Crimson Morass - A Swampy Area with an Aquatic Underwater room for those who like Sticky, Aquatic play with a Dark Angle.

Monolithic Circle - A Large, Outdoor setting for Large Rituals. A Portal to 'The Otherworld' can be found here, which is a Heavy NC-Style Demon play area.

This Document is just meant to provide a Brief History of the Estate. It's not total, or full.

In the 1400's, The Estate used to belong to a family of slavers, The Tomias Family. They were a Noble Family, assigned by the Local king to watch over a small village around the Estate (which was a much larger, castle-like manor affair back in the day), back when Slavery was an art, and something more refined and elegant than the 'sack and collar' of todays world.

The youngest son, Richard Tomias the Second, named for his father, was thrust into 'the family business' at a young age, taught how to pick proper stock, train slaves, how to deal with misbehaving slaves in a proactive manner that rubbed off on them so they would not repeat said behavior. Not long after these lessons were complete, his father and brothers were called to war, and died in combat. Richard the Second, being the only surviving heir to the title, soon rose to the head of the household.

Being so young, his fathers death had unnerved him a little to the point that it sometimes ate at him in his sleep. He too, could be called to war and die like a dog on some nameless battlefield, food for the ravens, while all he owned crumbled to nothing with no heir of his own to carry on his name; and so, perhaps realizing he too could die at a given time, Richard became interested in an odd cult that promised outlandish things like immortality and infinite power.

He called the leader of the cult before him, albeit in secret. The cult leader spoke of amazing ways one could become immortal, or extend their life, while the leader claimed to be ninety five years old, which, for the time, was ancient. Richard laid it out flat. He wanted power, and most of all, immortality. The cult leader thought, and dictated he would need a night to think on it.

The leader returned the night after, explaining the cults predicament! The Cult wasn't exactly 'legal' in the eyes of the king... their practices were quite blasphemous... they needed a safe haven. The Leader then went on to explain the Ritual, in a tone that was more than cautious. By tainting the land of the estate with the blood of five hundred trapped souls, they could imbue Richard with enough power in a terrible ritual to turn him into something akin to a demon. In turn for this act, The Cultists would move onto the property, and leech off the remaining power, which would linger as long as Richard was in existence.

Richard listened. His desire to become immortal far outweighed his common sense. He was willing to accept. But sadly, the resource needed... //five hundred// trapped souls was daunting. The leader of the cult smiled. He told Richard to leave it to him...

A strange sickness began to spread throughout the small village below, earning itself the name 'The Black Wind'. People began falling ill, and soon began dying. The King ordered the village closed off, due to the contagion. No one was allowed in, or out. Cemeteries filled quickly. Richard 'Humbly' allowed his land to be used for burial of the dead, but had odd instructions, that he be allowed to use his own 'priest' to give the dead their last rites. This was, of course, the lead cultist, who passed each dead body through the ritual as they were buried...

Soon, the village had become a ghost town. Either everyone had died, or those who were still alive, fled into the wilderness, taking their chances against the elements... but it didnt matter, the leader knew they had more than enough... already the property had seemed darker more sinister. The grass had died, and Richard began hearing things down the empty halls. Shapes in mirrors started appearing and Richard always felt like he was being watched. Then the cult leader approached Richard. It was time.

The Ritual went down without much of a hitch. There was no one to interfere left in the shell of a town below. The village became a forsaken territory, and became the stuff of legends.. many people went into the town with its odd castle manor and never returned, believe claimed by the rotting architecture of the village.

Sadly, things cannot remain secret for long. When news of some Vampire Lord living in the manor came to light 25 years later, and some sort of Holy Campaign began in the name of the Goddess of Light. The righteous army came, and leveled the town to the ground. A great many of the cultists were slain, and Richard was slain in a twisted form of the cults own rituals. It worked.. to a degree. Richard rose up in the forsaken territory, one hundred years later, none the wiser that a century had passed

He traveled to a far away land, known as Layleaux, and began the work of recreating his estate, choosing an area as similar as he could in town that reminded him of home, a dark thicket, and performed a similar ritual as before, albeit, with willing souls this time which he seemed to almost find an uncanny amount of in the strange town around.

He has since opened his Manor to many dark denizens, as well as many new comers of the old cult who read about the prophesied return of the Grand Haven after its first destruction, in hopes of having protection in case of another attempt to slay him, and once again destroy his manor.

You can Read the Current Rules and Policies of the Estate by typing 'Tport testate' on the MUCK and typing 'Rules' when you get to the Estate Entrance, Since the Rules are Subject to change and updating. Reading the rules are a requirement before entering the Estate through the main entrance.